Effectiveness of the world's fisheries management

The colors on the map depict the average of six different fishery management attributes evaluated for each country (i.e. science, policy, enforcement, fishing effort, subsidies and foreign fishing). If you click on a specific country, you will see the quarter on the scale of effectiveness in which the country was classified and the rank of the attribute relative to all countries evaluated. Given that countries may have similar scores, we ranked those countries equally. As a result, the rank of each country needs to be considered relative to the total number of ranks considered, which is also provided as the second set of digits between brackets.

The attributes analyzed included the scientific quality behind regulations, transparency in the process of policy making, enforcement of regulations and the extent of subsidies, fishing effort, and foreign fishing. Each of these attributes was quantified using our internet survey, which contains a set of normative questions about those attributes and whose answers could be rank from worse to best case scenarios. The responses to the different questions were concatenated, to quantify each attribute, by using multidimensional scaling. The resulting scale ranged from 0 to 1 and we divided it into four quarters (i.e. from 0 to 0.25, from 0.25 to 0.5, from 0.5 to 0.75 and from 0.75 to 1, with the lowest quarter indicating the worst combination of attributes and the top the best). We used the actual score to rank the countries and that data are provided between brackets when you click on a specific country. The survey was carried out between 2007 and 2008 and included requests to nearly 14000 fisheries experts in every single coastal state in the world. 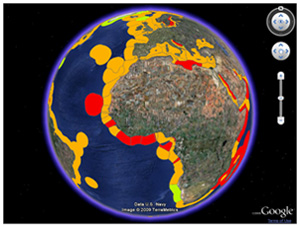 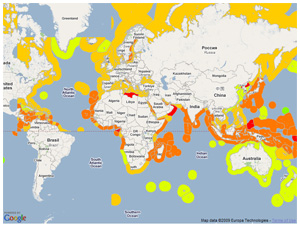